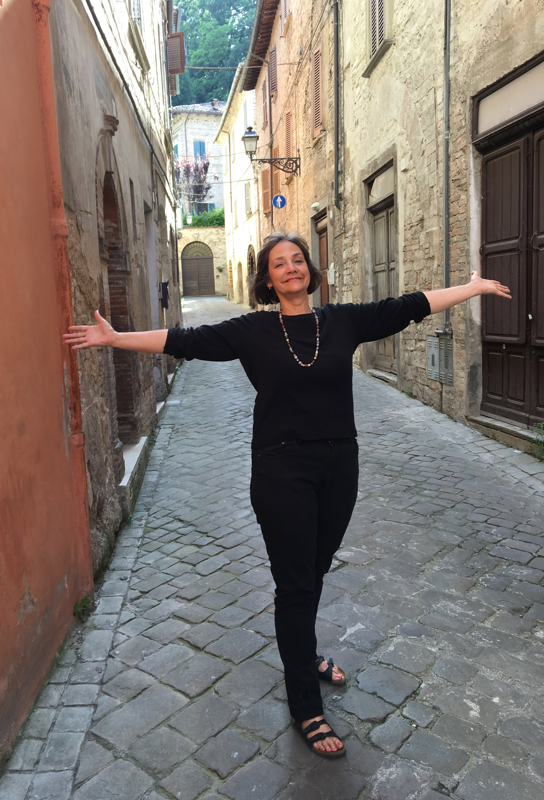 A friend just asked me how I came to be living here. It’s hard to pick a place to start the story. There are dozens of flashes through my synapses when I’m asked the question– little photons that to me seem part of the whole picture but probably aren’t relevant to anyone but the most patient friend. I’ll begin with the one that paints the most romantic picture.

In 2010 my husband Michael surprised me with a trip to Venice for my birthday. We were going to spend a couple of days there then rent a car and tour Le Marche. For a number of years we had fantasized/joked about moving to Italy. We’d had a couple of glorious vacations here including one month-long trip where we went 18 days without meeting anyone who spoke English. Our traveling style is to go off the beaten track and see how real people live. We taught ourselves a little Italian– Michael is better at languages than I so he did most of the communicating.

Le Marche is a province in central Italy along the Adriatic. There’s not a lot of information about it in the guide books but we figured it had to be geographically similar to its immediate neighbors Tuscany and Umbria but less touristed and therefore lower cost. Michael planned a route through the three largest cities– Urbino, Macerata, and Ascoli Piceno.

The night we arrived in Urbino it was raining gatti e cani. I could barely walk on the slippery cobblestones. Not a great start. Unbeknownst to me, Michael had looked at a real estate magazine and was really shocked at the prices. On our first day he decided it was hopeless. We could never buy here.

He didn’t tell me his thinking. Nor did he ask me mine. In my Italian fantasy we moved to a small village like Cortona in the Frances Mayes books. The cities that Michael picked for our exploration, while not major metropolitan areas, they were much larger than I desired.

The weather improved. We were winding our way south along a pretty route. Even in late November the countryside was lovely. We stopped for coffee in a little town called Pergola. It had an energy about it. I told Michael we had to break the ice and just got to a real estate office and have an initial conversation just to say we’ve done it. We saw the perfect place to try– called CasaMania with their sign in Party font. That seemed auspicious. The owner, Paola, wasn’t in but would be back in 15 minutes. We wandered around some more in the centro storico and tried to calm our nerves.

We returned to the office. We just wanted to know if it was at all possible to find something small, in town, in our price range. She said, “Certo” and started gathering keys to show us the actual apartments.

The next hour or so is a blur. We were dumbfounded, gobsmacked, thunderstruck. Here we were walking into these charming homes in medieval buildings, several of which looked as though Nonno e Nonna had just stepped out for a moment. Everything was as if they still lived there. Luckily I had the presence of mind to take some photos because otherwise our brains were mush.

It so quickly became a reality. We returned to Paola’s office and talked about how it all might work. Michael and I both loved the first place we saw. It was in a 13th century palazzo that had been the home of a nobleman. Our apartment was probably the servants quarters. The building was a condominium and Paola’s office managed it, therefore she could manage things for us as long distance owners.

I know some people would have trouble trusting a transaction like this but we felt complete faith that it was all aboveboard and have never had a single regret.

As we drove away that afternoon we were already speaking of it as our apartment and imagining having our friends come and visit us there.

Originally we were just going to vacation there– maybe use it as a base to see more of Europe. We came for a month in May of 2011 and signed all the papers. Then came for two months in the fall, then three months the next spring. That was the most we could do with a tourist visa but it wasn’t enough. Leaving was heartbreaking. We’d arrive, get into local life then after two months had passed this pall would come over me and I’d moan that I only had a month left in Italy! I recognized that most people would not feel sorry for me and play their tiny violins.

It quickly became clear that Michael and I both loved Italian life and wanted to live here full time. How we negotiated the visa process is another story. Everything about this place is another story. The simplest things are adventures. Every time I walk out my front door and see the architecture it takes my breath away and I realize omigod I live in Italy.

The point I hope you take away from this is that it was easy. We had a fantasy. We took steps. Everything fell into place. Nothing can keep you from a right idea.