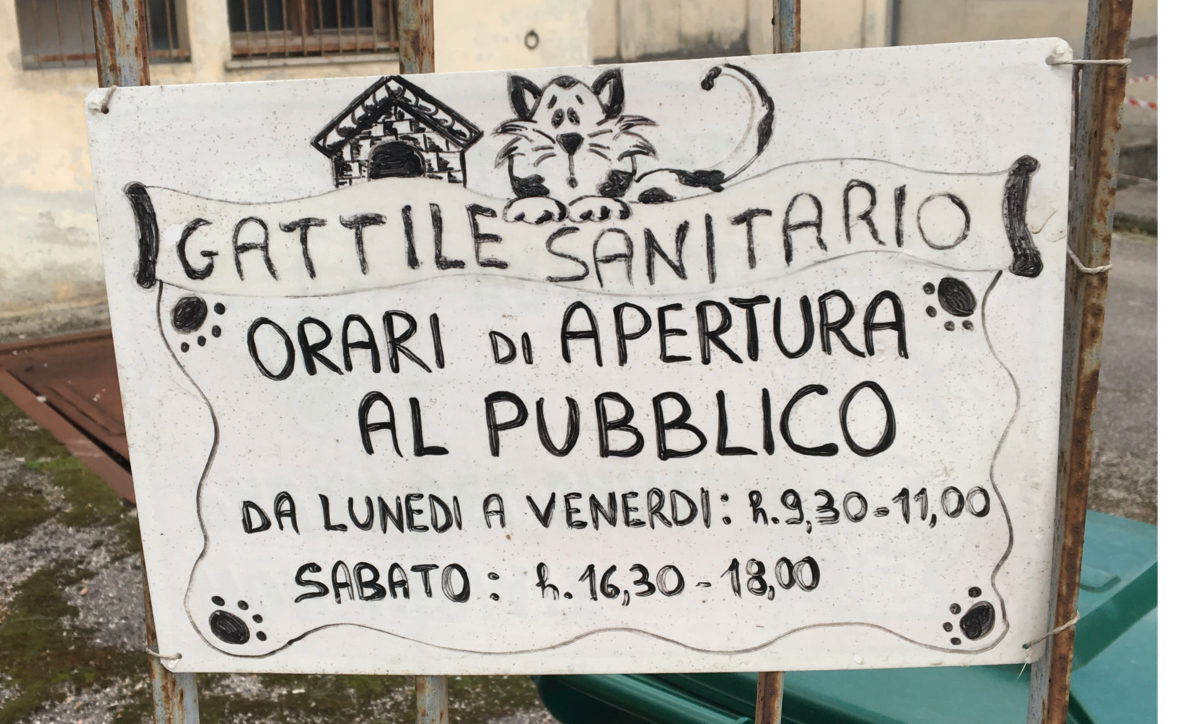 Ever get the feeling that you’re being pulled along into a more adventurous life than you’d intended? That you somehow make choices that seem out of character? Or maybe it’s that I pretend I’m helpless against these “external” forces. That seems more likely than the fact that I would choose to do this on my own.

Here’s what happened– Michael and I were walking past this large, abandoned (or so I thought) complex that used to be a slaughterhouse and noticed a sign we hadn’t seen before. The mattatoio was now being used as a gattile. I looked it up and learned that translates to a “cattery.” Apparently Italian law states that homeless animals are the responsibility of the community and need to be cared for instead of abandoned or euthanized, and this building is where the cats are kept.

I’d seen the organization at local events– the name translates as The Friends of Pluto and Sylvester. Some friends of ours, who practically have a gattile of their own, explained how it worked and who was in charge. I started reminiscing about how I’d play with the kitties at the shelter when I was a preteen.

All of a sudden I found myself texting the organization and saying I wanted to volunteer.

I’m very fond of cats. Dogs are okay, but I’m definitely a cat person. Michael, on the other hand, is wildly allergic. He tolerated my beloved cat when we met because she was there first, but he suffered a great deal (or so he says). Years later whenever I brought up the possibility of another cat he would say things like, “Okay, you can have a cat if I can have a coyote.”

So it seemed like a good idea to volunteer. Last week I went to meet the woman in charge. This morning I went in for my first time to get shown around. I’ll go again on Friday with a partner and then get my own keys and added into the schedule.

I’m impressed with the treatment these cats receive. They are fed high- quality food twice a day by caring people. They have a warm, clean place to live. At the moment there are only six or seven in residence. That will increase, no doubt, in the spring.

I figure a couple of hours a week putting out food and scooping litter clumps is doable and a useful service. The cats don’t mind that my language skills are inadequate. However, Gli Amici di Pluto e Silvestro also deal with the public– at local festas, and when people bring the animals they find. I’m a little panicked about that. Let’s hope they don’t throw me into the deep end of the cat box too soon.

But it’s good for me. Like spinach. And flossing. It gets me out in the community, practicing Italian, doing something worthwhile.